Q. What Samples can be used? 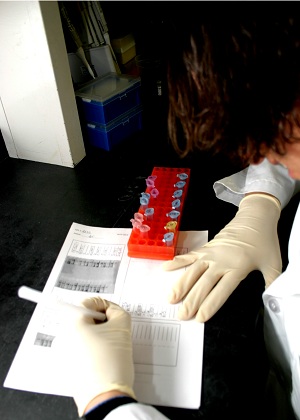 These samples can usually be processed at normal fees. Please ask your representative if you are unsure. They cannot be mixed with anyone else’s DNA.
The following will always have additional charges

Please contact us for your exact situation for instructions. Many other samples can also be used.

Q. What is a normal sample?

It involves rubbing 4 sterile q-tips on the inside of your cheek.

DNA remains the same throughout the body. So there is no reason that blood is needed, and it does not increase the accuracy of the test.

Q. Why are accreditations important?

Getting a test completed at an unaccredited laboratory is dangerous. There is no government oversight of paternity testing.

So going with an unaccredited company, who has never been inspected by anyone to make sure they are actually performing tests in the first place, is not a good idea. Always check into the accreditations a company says it possesses. The accrediting body will have lists on their sites about who they have inspected and accredited.

Q. Why should the mother be tested also?

When the mother is not tested, the result will be weaker do to the fact of chance of having one of the DNA marker match the father, but actually be from the mother.

We live in different cities. Do we all have to be tested at the same place?

This is usually not a problem, even if they are in different countries, as long as we have a collector in that country or city it is ok.

Q. We are not giving our specimens at the same time. How do I know the right person was tested?

This is not a problem, in any legal test everyone will be fingerprinted and photographed. We have had cases before where a friend acts like the father, or the mother brings the incorrect child. Anyone perticipating in the test can request to see the pictures.

Q. Why does the test takes so much longer than on TV?

For talk shows, the participants give their samples days or weeks before the show is filmed. Only the answer is revealed on the show.
CSI and NCIS Much of what you see on these types of shows is fake. Such as, a hair sample is a horrible sample for a DNA test.

Q. What Makes a Paternity Test Acceptable for Other Official Purposes?

With a proper chain of custody, and a collector that is uninvolved with that test participants, the test can be used for legal means.

All legal testing test participants will have their identification checked, photographed, and fingerprinted.

Q. Why Obtain an Official Paternity Test rather than a Home Test?

The ability of anonymity to have a kit shipped to your home, take the samples, and ship it back is a benefit of home testing.
The problem comes in when you have to end up using this test for something legal. You would have to pay for an entirely new test.

Q. Is the test confidential? Who can get the results?

Q. Why does a higher probability of paternity matter?

Simple the higher the paternity index the more accurate the test. Some companies that do not have any sort of guarantee, that are putting out 7-15 loci test, their paternity index will be so low, that a certain percentage of their tests will have false inclusions.

This would cause someone who is not the father to believe he is. One thing that would cause a higher percentage of this would be a motherless test, when the child has a mutated gene.

Q. Do I need to test both alleged fathers if they are brothers?

If there is possibility of two alleged fathers being closely related, it is always a good idea to have them both tested at the same time. There is a higher possibility of a false inclusion, when it was actually the other brother if you do not.